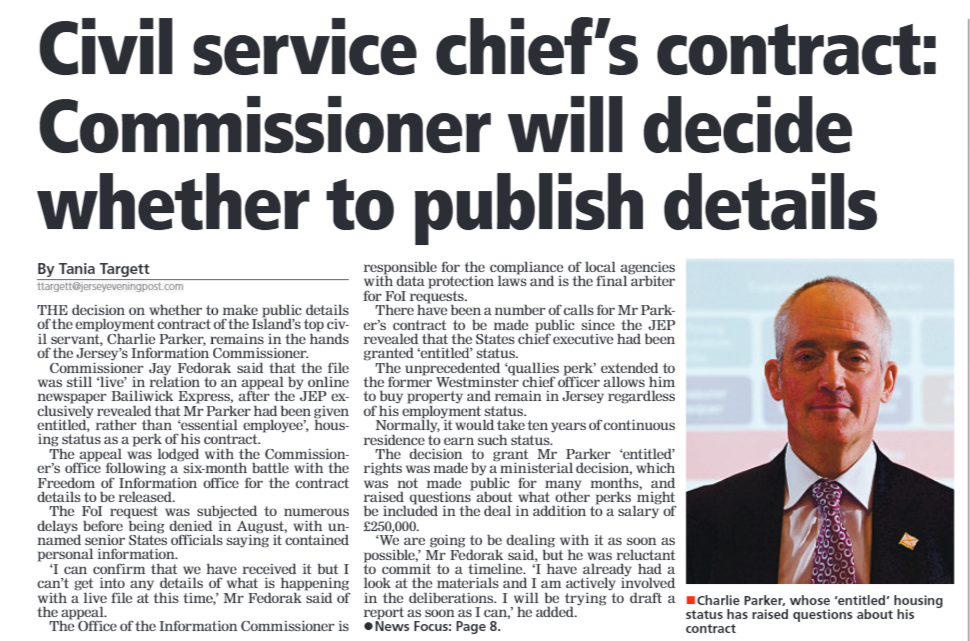 The decision on whether to make public details of the employment contract of the Island’s top civil servant, Charlie Parker, remains in the hands of the Jersey’s Information Commissioner; reported the JEP on Saturday the 3rd November.

Commissioner Jay Fedorak said that the file was still ‘live’ in relation to an appeal by online newspaper Bailiwick Express, after the JEP exclusively revealed that Mr Parker had been given entitled, rather than ‘essential employee’, housing status as a perk of his contract.

The appeal was lodged with the Commissioner’s office following a six-month battle with the Freedom of Information office for the contract details to be released.

The FoI request was subjected to numerous delays before being denied in August, with unnamed senior States officials saying it contained personal information.

‘I can confirm that we have received it but I can’t get into any details of what is happening with a live file at this time,’ Mr Fedorak said of the appeal.

The Office of the Information Commissioner is responsible for the compliance of local agencies with data protection laws and is the final arbiter for FoI requests.

There have been a number of calls for Mr Parker’s contract to be made public since the JEP revealed that the States chief executive had been granted ‘entitled’ status.

‘We are going to be dealing with it as soon as possible,’ Mr Fedorak said, but he was reluctant to commit to a timeline. ‘I have already had a look at the materials and I am actively involved in the deliberations. I will be trying to draft a report as soon as I can,’ he added.